DACA is an acronym for Deferred Action for Children Arrivals Program. It currently protects nearly 800,000 undocumented immigrants from deportation.  It allows two-year stays for certain undocumented immigrants who entered the country before their 16th birthday and have attended school or joined the military. In addition, they have not committed any serious crimes.

They receive a renewable two-year period of deportation protections and eligibility for a work permit. Some enrollees are currently on their third term.

When was DACA created?

DACA was created in 2012 by the Obama administration after several failed attempts in Congress to pass a law to protect from deportation undocumented immigrants brought to the country as children.

While announcing the program during a speech in the Rose Garden, Obama said those DREAMers — undocumented immigrants brought to America as children — didn’t make the decision to enter the U.S. illegally and shouldn’t be punished as a result.

Are all DREAMers part of DACA?

Not all DREAMers became DACA recipients. There are a total of 1.9 million undocumented immigrants eligible to apply for the program, but many have not, according to the Migration Policy Institute. The federal government has approved 787,580 people for the program.

To apply for DACA, immigrants must have come to the United States before 2007. The immigrants were required to have been 15 or younger when they arrived and younger than 31 when DACA was created in 2012. They had to have a clean criminal record and be enrolled in high school or have a high school diploma or equivalent.

Why can DACA be taken away by the executive branch?

The program was created through a memorandum from the Department of Homeland Security, which means it could be rescinded at any time without any input from Congress. That was always a concern of applicants, who knew their protections could be taken away by a future president and the personal information they provided could be used to arrest and deport them.

Is the DACA Program in danger of being rescinded?

This week DACA has made headlines because the Trump has decided to let the two-year permits issued under DACA begin expiring in six months amid concern about a legal challenge to the program, which was created by executive action. Trump said in a tweet Thursday that he expects “massive border security” in exchange for a deal on DACA, which he also defended as the right thing to do. Trump and the White House went back and forth on whether that included a border wall, The following video published by CNN further explains Trump’s insight on the DACA program:

Who are fighting to maintain the DACA program?

A variety of groups pleaded with the Trump administration to maintain the program. On Aug. 14, more than 100 law professors signed a letter to Trump insisting that DACA is perfectly legal. This week, a group of more than 1,850 governors, state attorneys general, faith leaders, police chiefs, sheriffs and civic leaders signed a statement urging Trump to keep the program. And on Thursday, hundreds of tech and business leaders from Amazon’s Jeff Bezos to Google’s Sundar Pichai sent a similar letter to Trump. 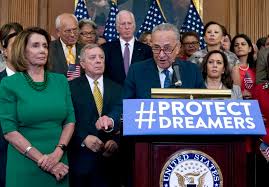