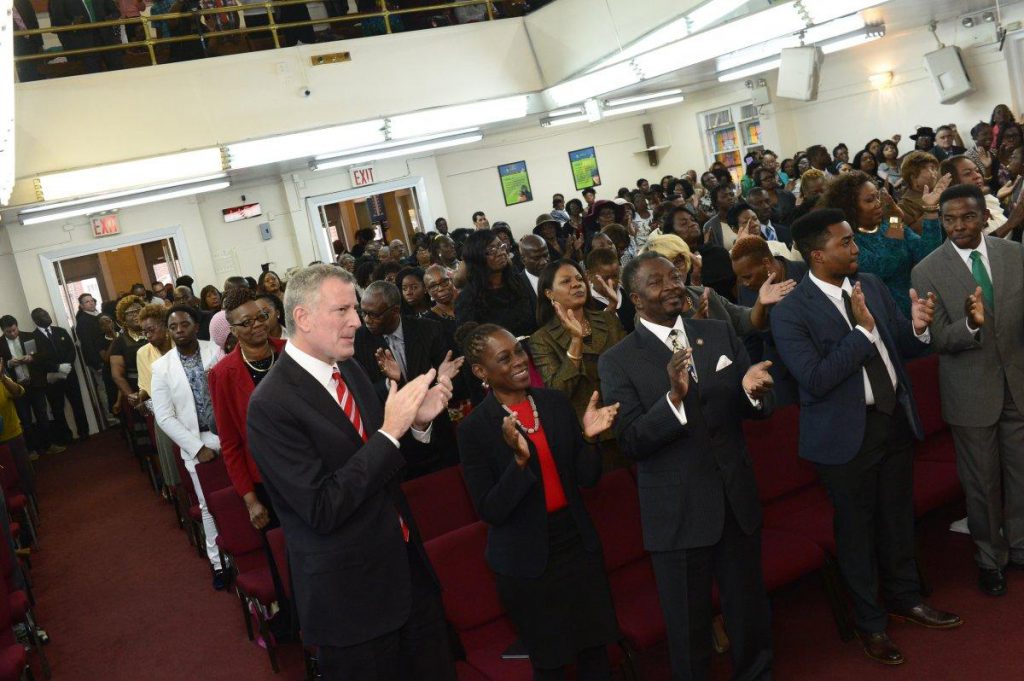 Black clergy in New York and around the country used the last Sunday before Election Day to move “souls to the polls,” while Hispanic groups also worked to mobilize voter turnout ahead of Tuesday’s presidential balloting.

“Fellow citizens, we have all been in the throes of bitterness,” said the Rev. James Forbes, retired senior minister at Manhattan’s historic Riverside Church, which hosted a nighttime revival service to encourage the faithful to vote.

Early voting data suggest black voter turnout will not be as high in the contest between Hillary Clinton and Donald Trump as it was four years ago, when the country voted to reelect President Obama, the nation’s first African-American President. Obama has stressed his own legacy is on the line Tuesday, a message pastors and other officials echoed Sunday. 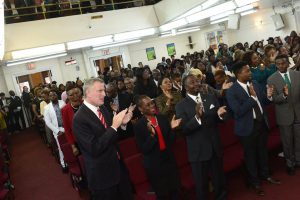 Mayor de Blasio stumped for Clinton at five predominantly black churches in Brooklyn, arguing turnout is crucial, even in a safely Democratic state like New York.

“We have a leader poised to make that change if she has our support and if we give her a mandate — not just in the quote-unquote swing states, but here in New York as well,” he said at the Christian Cultural Center. “Anyone know anyone who may not vote? I’m asking you to change their minds.”

De Blasio said an overwhelming Clinton victory would help the nation “heal” from the havoc caused by Trump’s campaign.

While the black vote appears to be on a downward swing, early tallies suggest record turnout by Hispanics, who have voted at lower rates than whites and blacks in past elections. This year they appear to be reacting to Trump’s staunch anti-immigrant rhetoric.

Volunteers led by Sen. Adriano Espaillat, the Democratic nominee for Congress from northern Manhattan, boarded a bus to Bethlehem, Pa., to mobilize Latino voters in the swing state. “The Latino vote, which is a sleeping giant, has awakened,” Espaillat said. “Last week we were in Reading, Pa., and we knocked on 3,000 doors. We’re going back today to knock on another 3,000 doors. This is a turnout operation.”

In lower Manhattan, volunteers for Clinton called Florida voters. Noa Brown, 12, and her friend Rosa Desario, 13, far too young to vote themselves, came to lend a hand.

“It would not be a very bright future if Donald Trump was elected,” Noa said. “I do not believe in the building of a wall between Mexico and the United States. . . . I believe in immigrants’ rights.”

The girls also said they were hurt by Trump’s treatment of women. “It physically hurts,” Noa said. “I think especially if we had a female President, that could change.”

While carefully avoiding running afoul of rules that prohibit tax-exempt religious institutions from endorsing candidates, pastors in battleground states did not hide a distaste for Trump.

“There are some folk in this country who think that to make this country great again, we’ve got to exclude folks,” said the Rev. Mark Tyler, pastor of the Mother Bethel A.M.E. Church in Philadelphia. “We’ve always been great because we’ve always been open to strangers.”